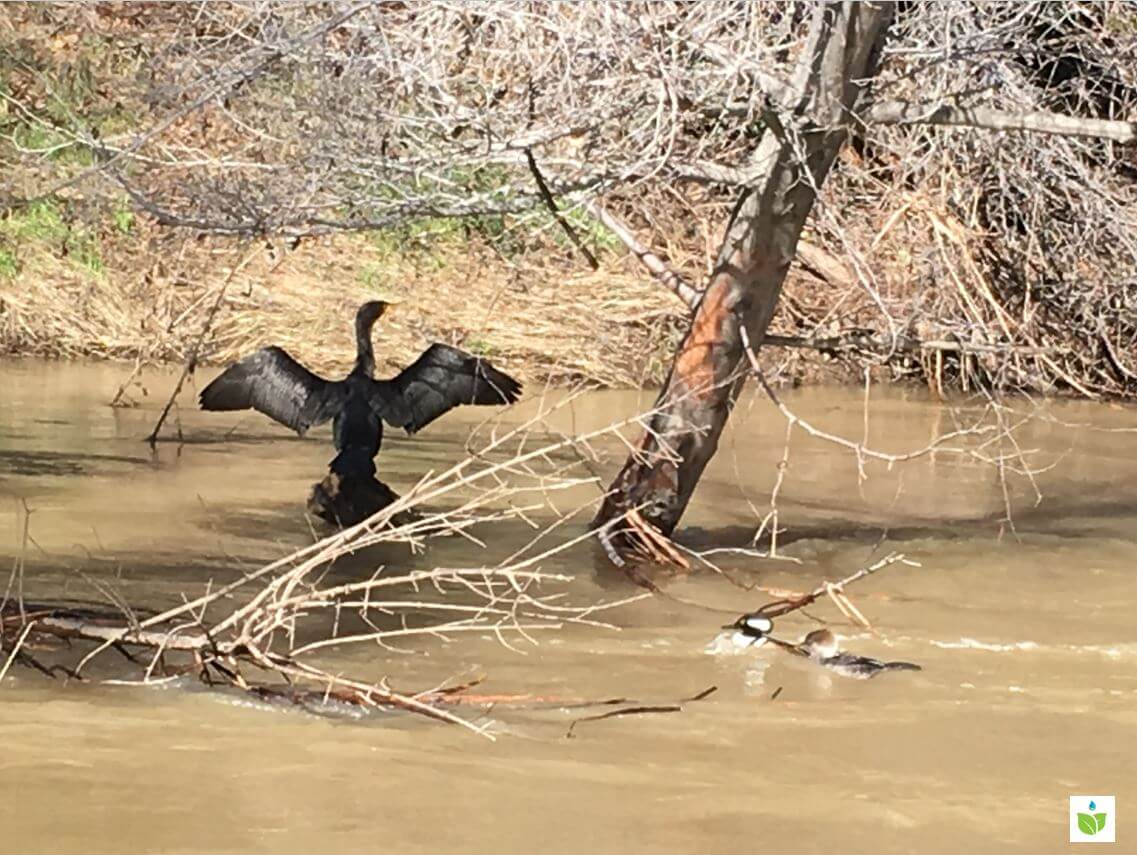 In Santa Clara county where the Silicon Valley is located, Los Gatos Creek is one of the few urban streams that remains relatively intact throughout countless developments in the area during the last 200 years.  The stream originates in the Santa Cruz Mountains, flows into the Vasona Reservoir, winds through a small valley, and clears into the Guadalupe river that finally empties into the San Francisco Bay.  It is one of the many steams and creeks in the vast Guadalupe River watershed, and a habitat for many wetland species. 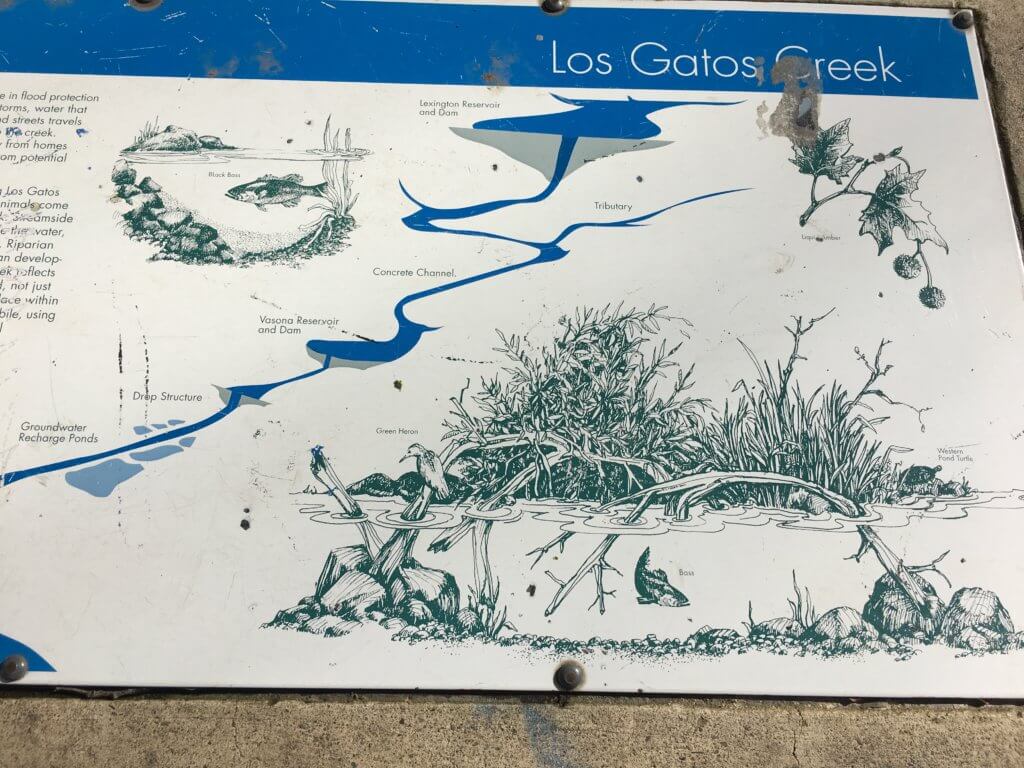 Watersheds are critical habitats for birds, fishes and other animals that live a wetland environment.  200 years ago, before any of the modern developments, the creek must have been a heaven for the birds and fishes.  At the time, all kinds of birds could be seen flying in the sky and resting in the creek; fishes swimming through the creek in massive numbers.

Unfortunately, in the 200 years since, “about 90% of California’s original aquatic habitat has been altered or destroyed through human activities”, more than any other states in the nation.  What we see in Los Gatos Creek today is one of the 10% that remains. 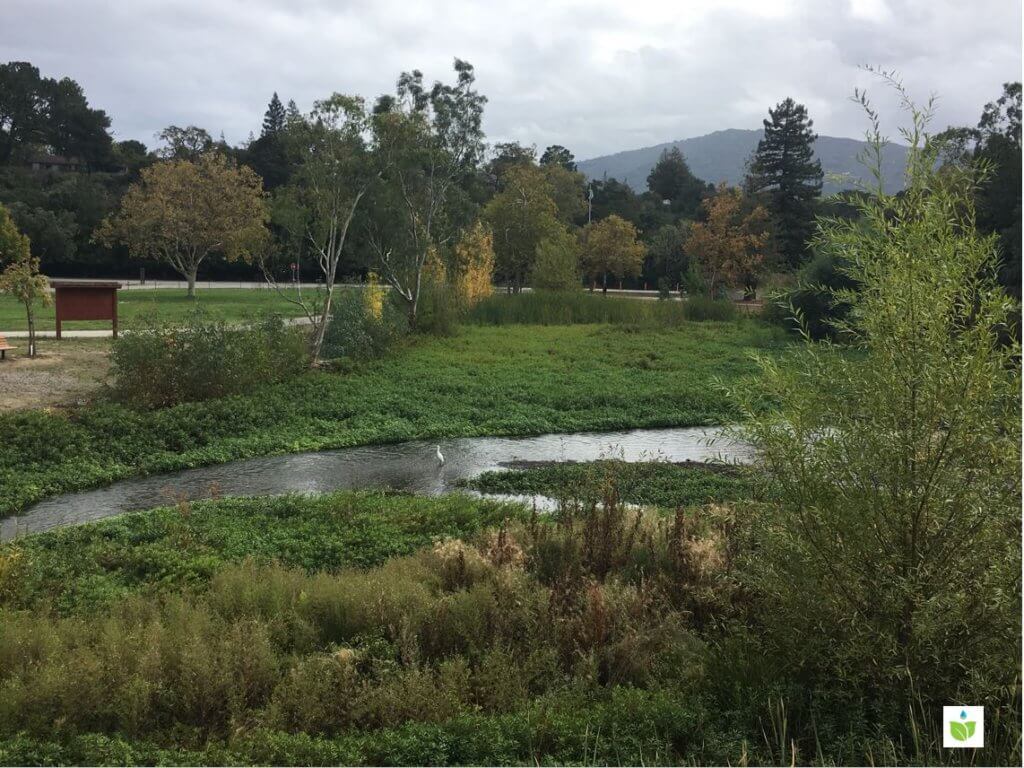 Today many of the parks like Los Gatos Creek often provides the only refuge in urban areas for native wetland species.  They have been living here for tens of  thousands of years.   During migration season some species of birds will also come and use the place as a resting area, critical for their survival.  If the park no longer exists, or its environment dramatically changes, it can be devastating for all the birds that have been depending on it for so many years.

The birds that can be seen most often are Canadian goose. 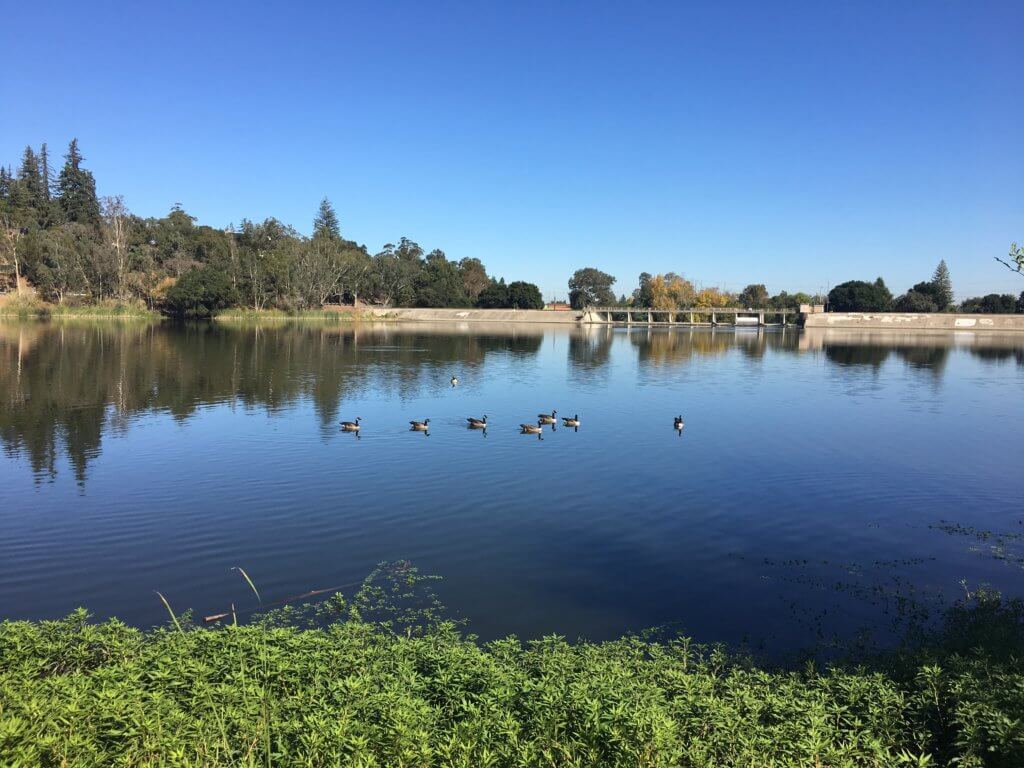 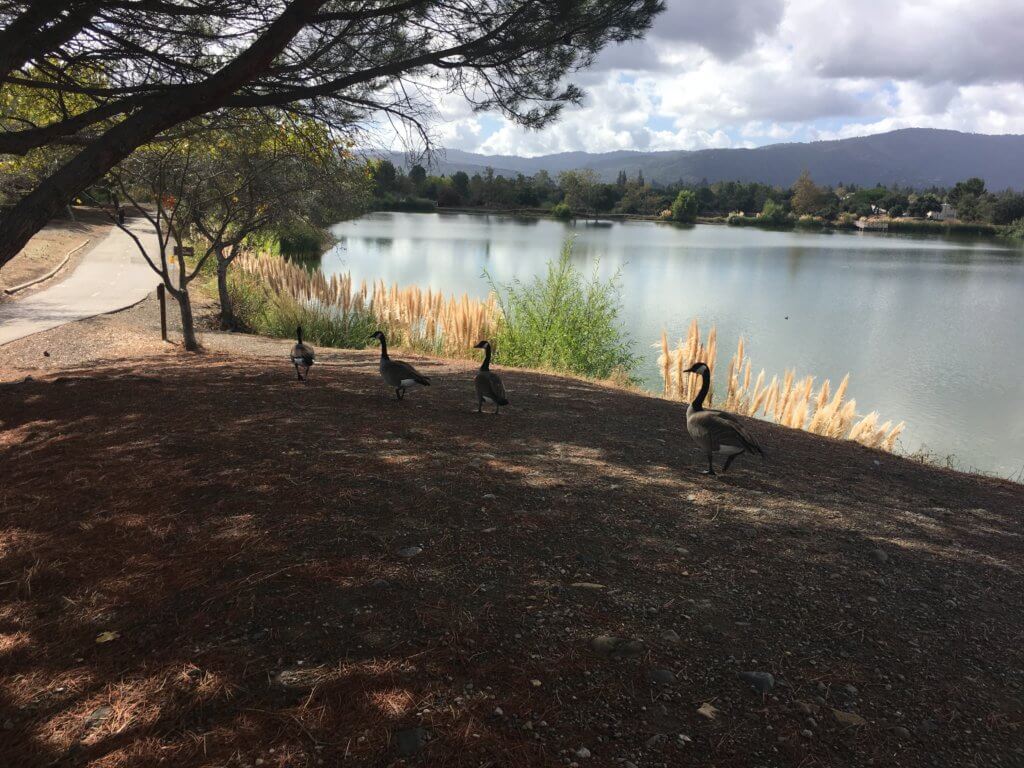 Great egret and snowy egret can also be seen from time to time. 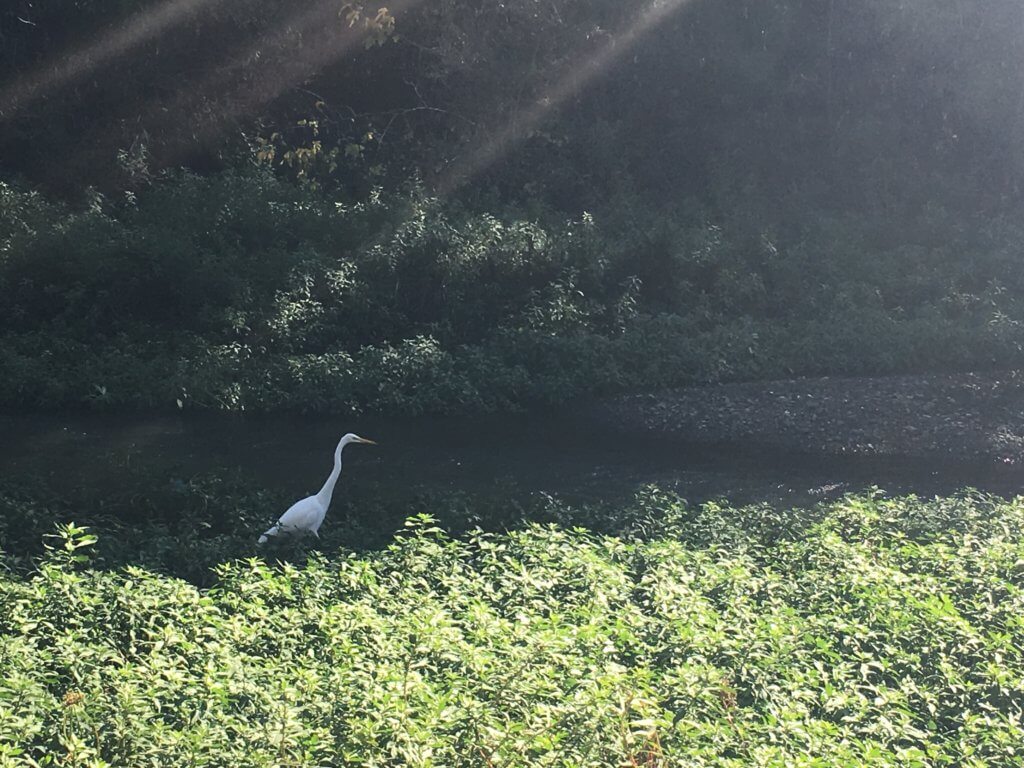 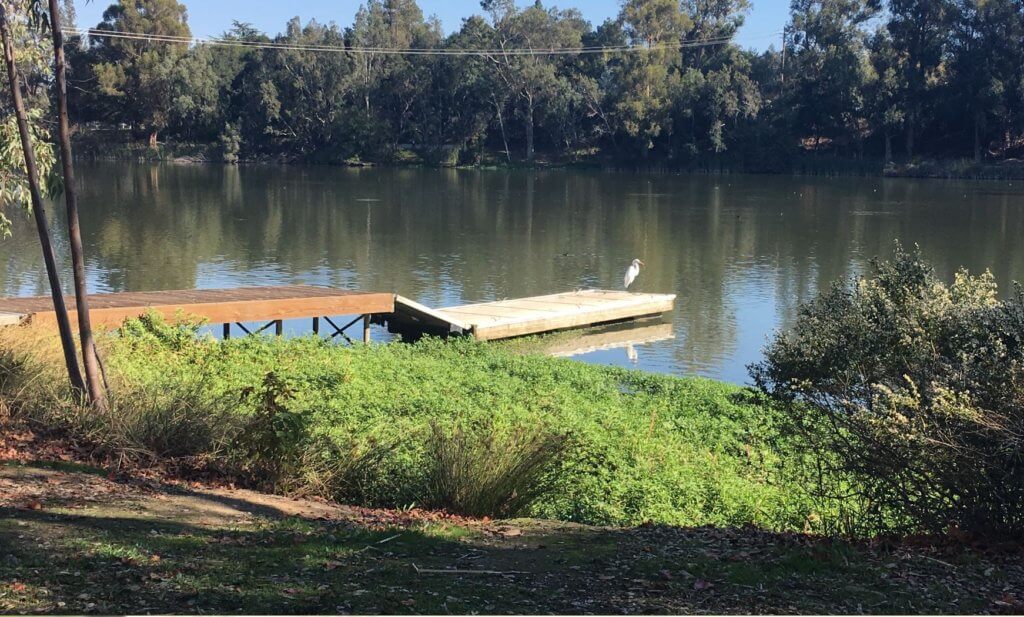 This was in the migration season of November.  These birds were taking a rest before they flew out to their next destination. 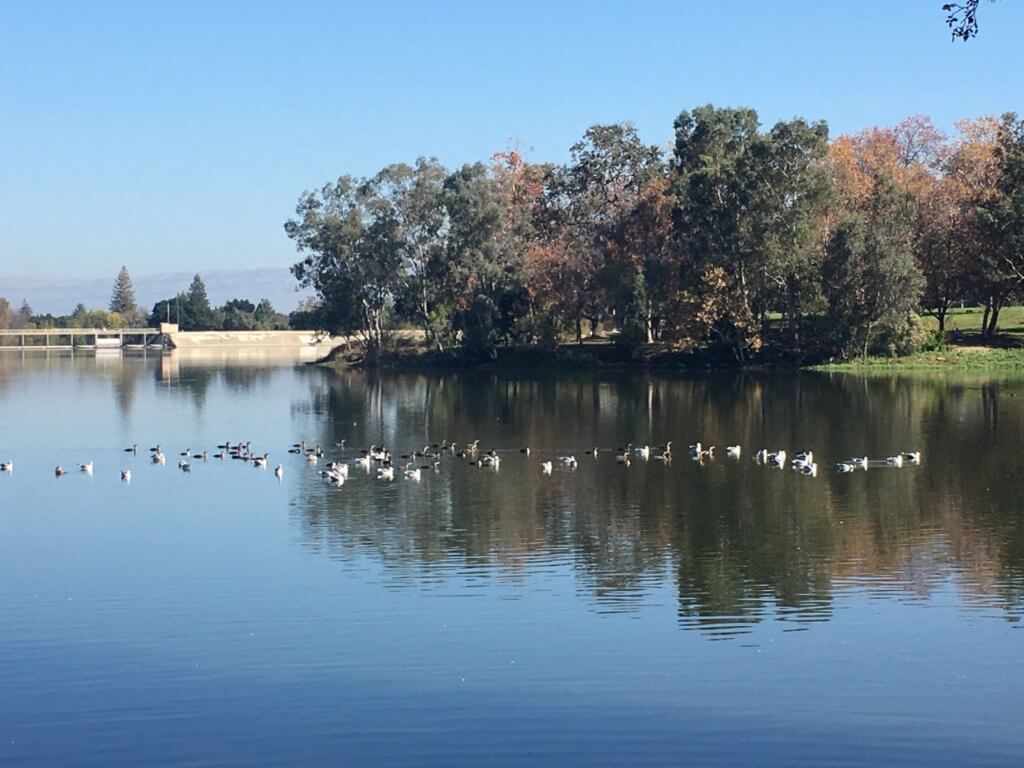 Bird sightings after storms in 2016 winter

After an epic, historic 5 year drought, starting from late fall of 2016, California went from extremely dry to extremely wet, with record breaking rainfalls.   Heavy rains pummeled from late fall all the way  into spring, in some places floods and mudslides occurred.  At Los Gatos creek, parts of the trail were also flooded several times. 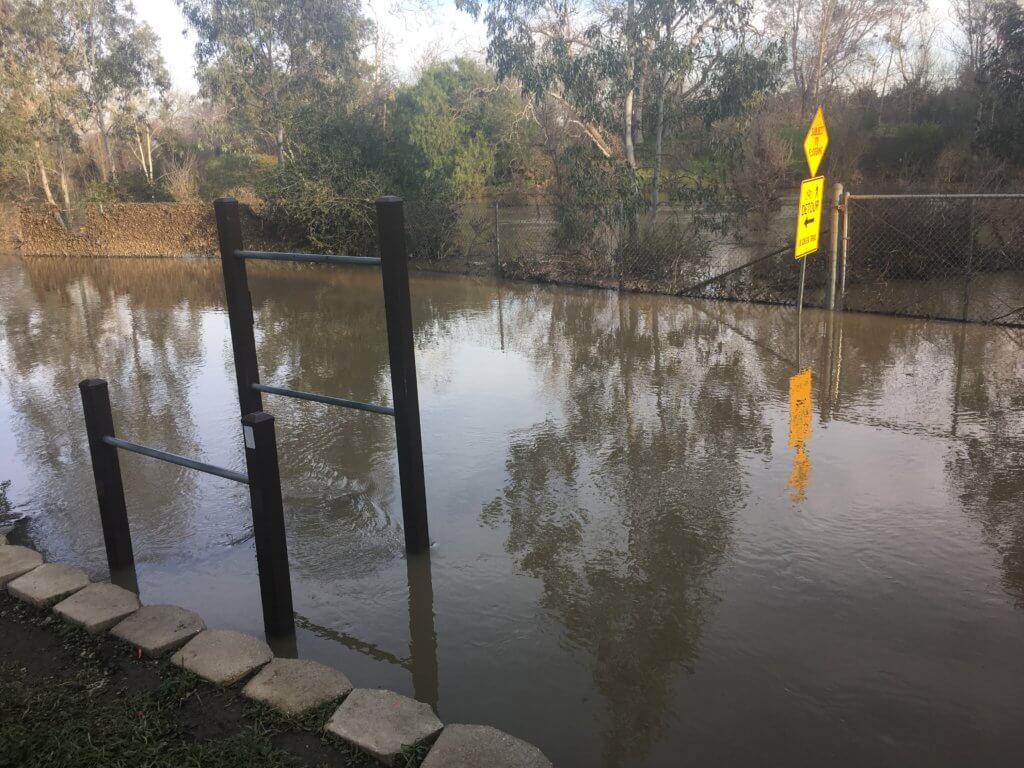 The new “stream” in the previous trail was quickly discovered by some lovely “guests”.  They came in swiftly, playing in this new playground of theirs, relaxing, fishing and enjoying a good meal! 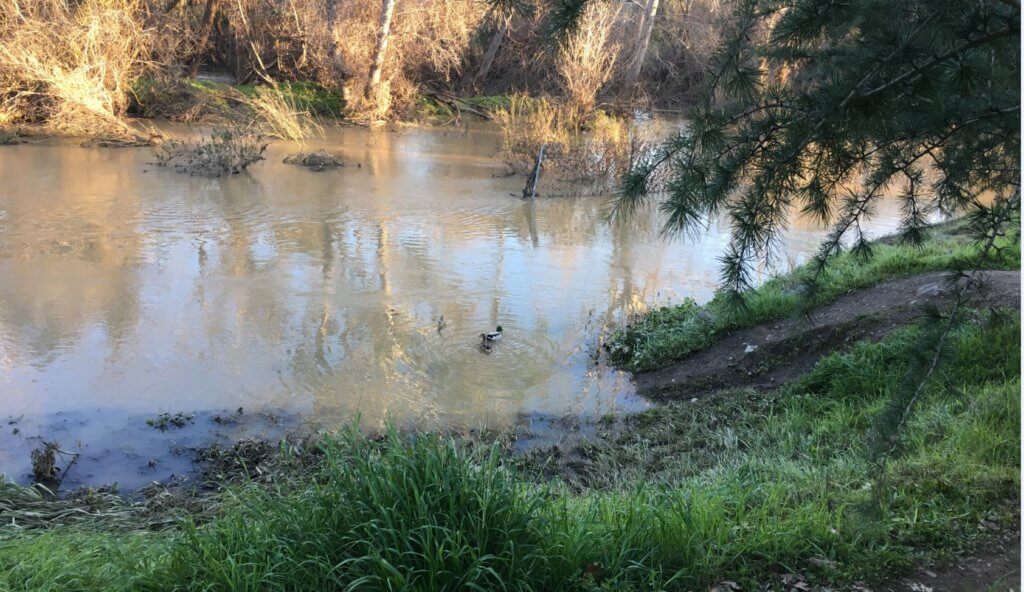 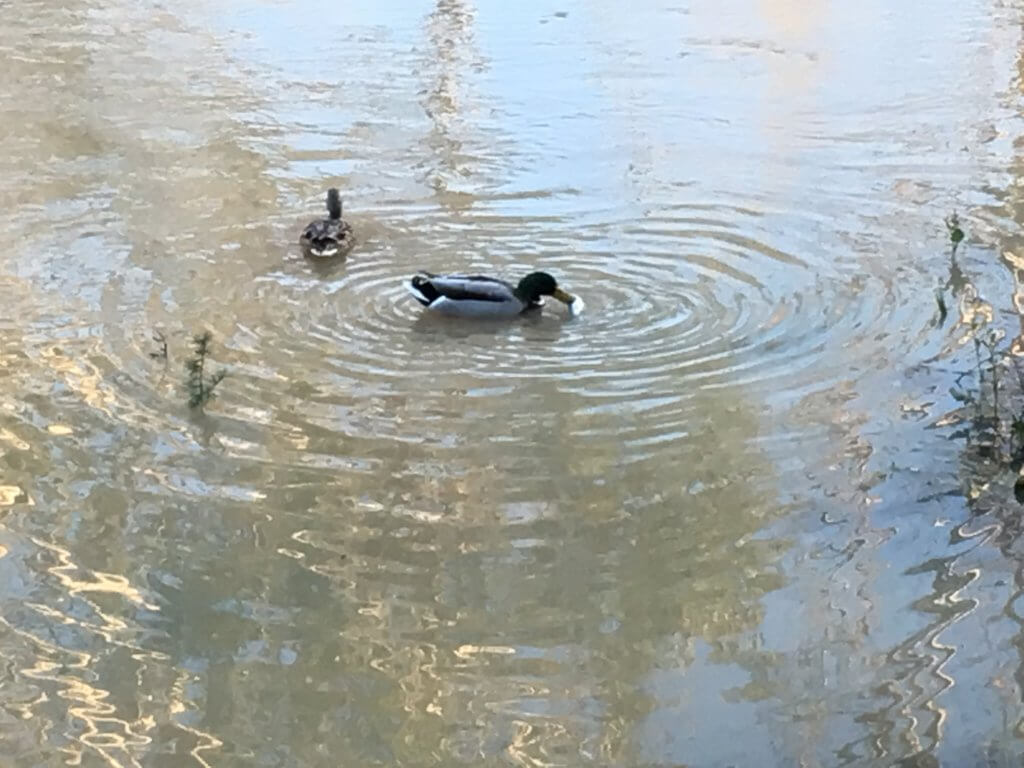 Same as these ducks, quite some birds found out the new water and came right in.  Here is normally what you would see when you cross a bridge to enter the trail and look down at the water .  The right side of the creek bed is completely dry.  On the morning after several heavy storms in January, though, the whole span of the creek bed was fully filled with flood water.  On the muddy yellow water you could see these two little birds, guests that were not seen here before. 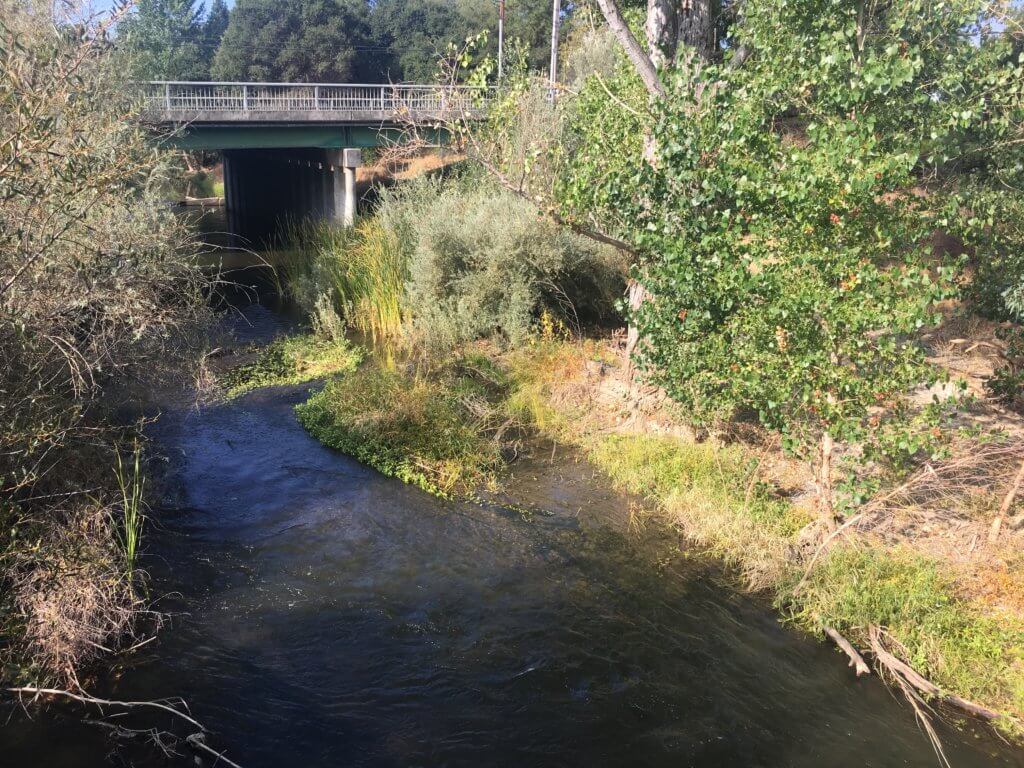 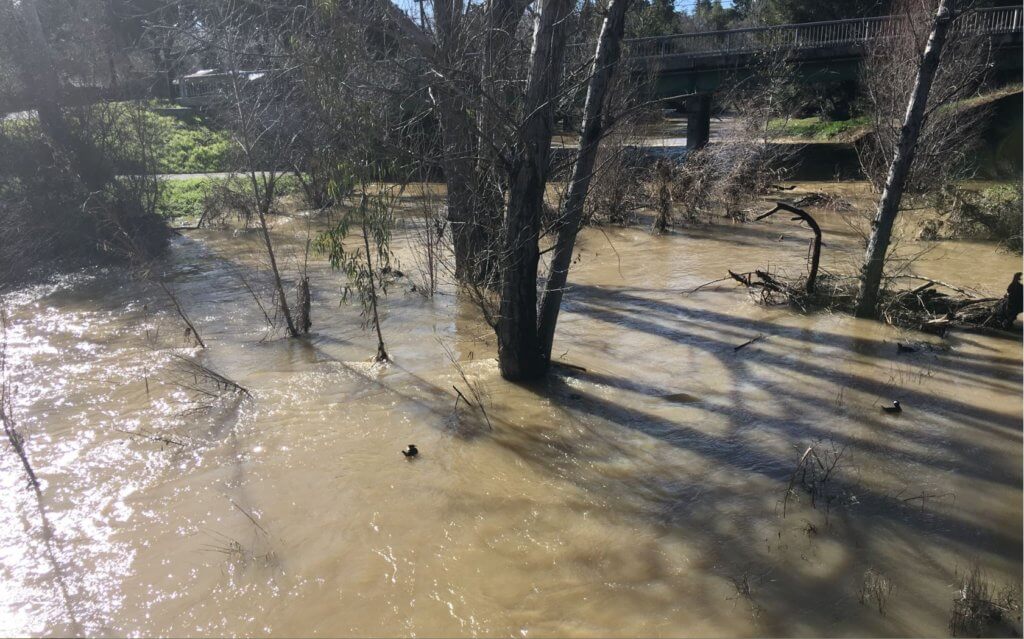 They are hooded mergansers. 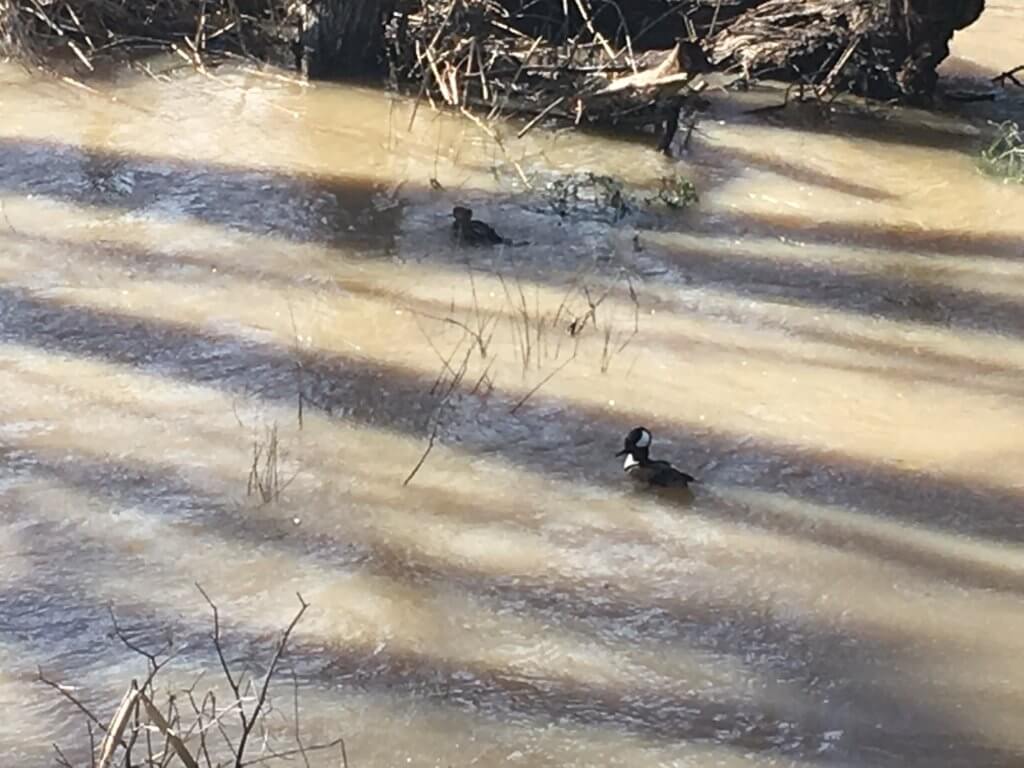 After you walked a bit more along the trail, there was another surprise waiting.  A Double Crested Cormorant was “relaxing” on a tree, which was never seen here either.  She streatched her wings, turning her head from left to right, right to left, then left to right….with the kind of excitement of a baby.  In the second photo, the two small birds could also be seen swimming in the same place. 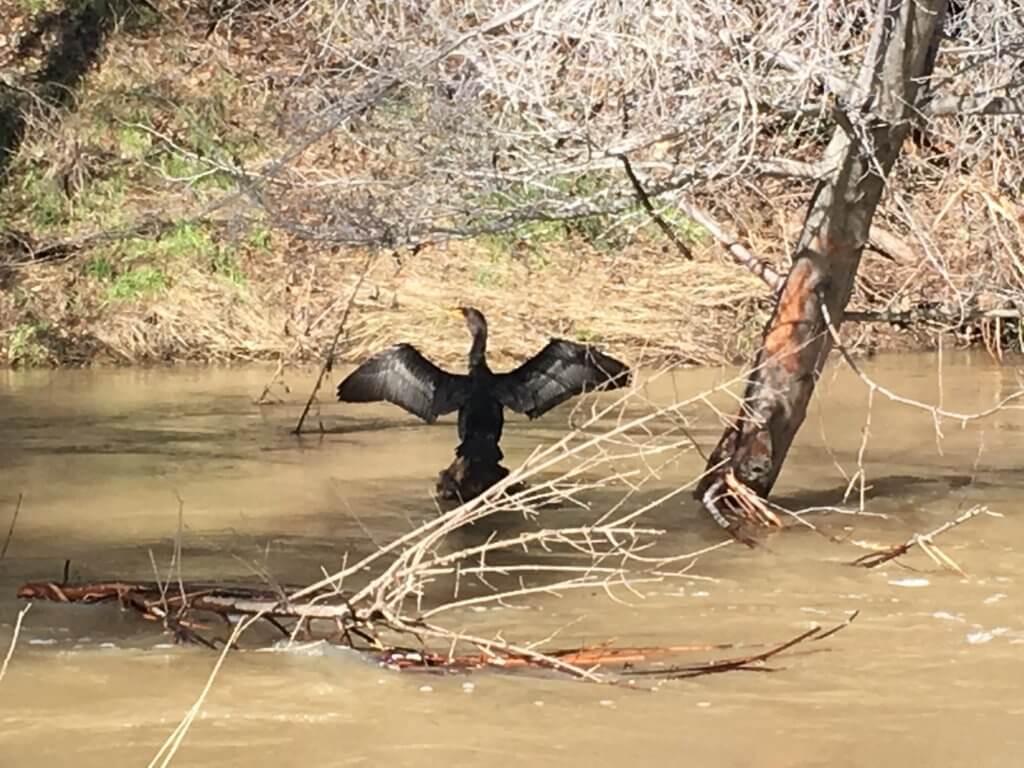 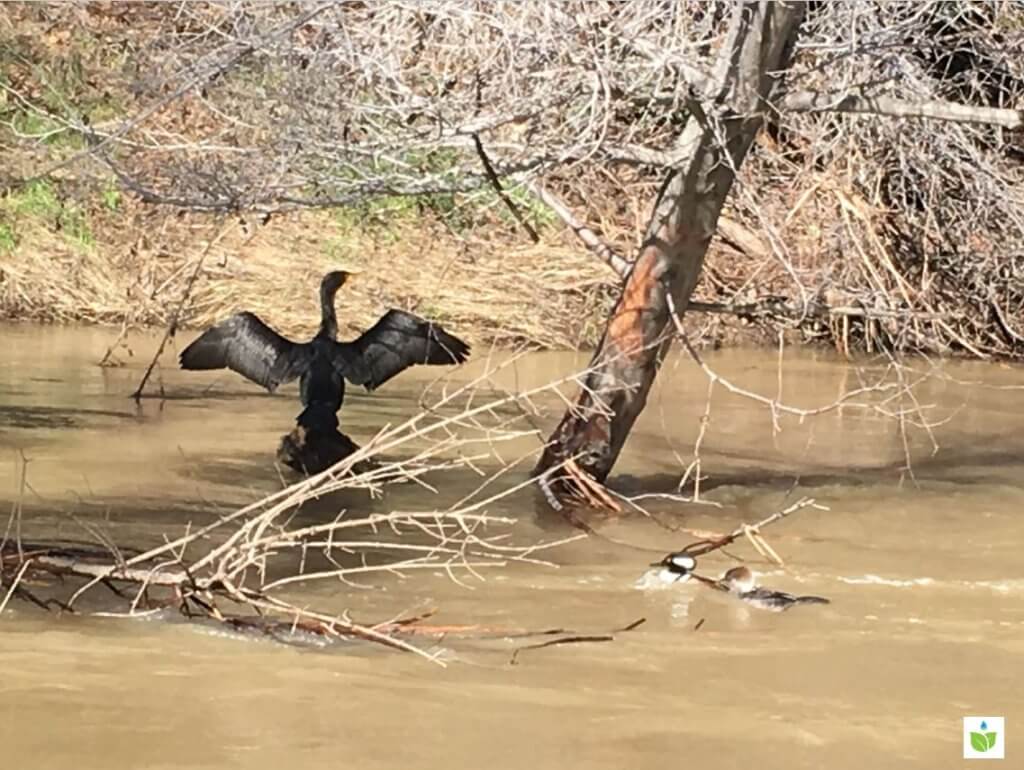 The cormorant really liked it here. In the next 2-3 weeks you can see her swimming, resting and relaxing in this particular spot. 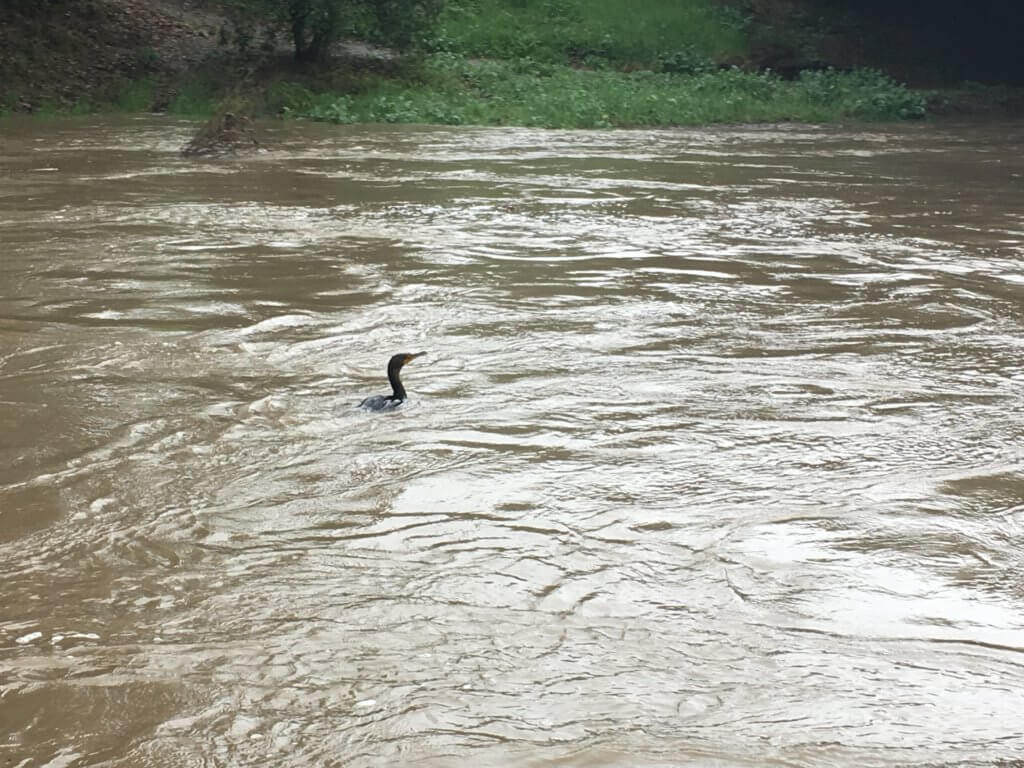 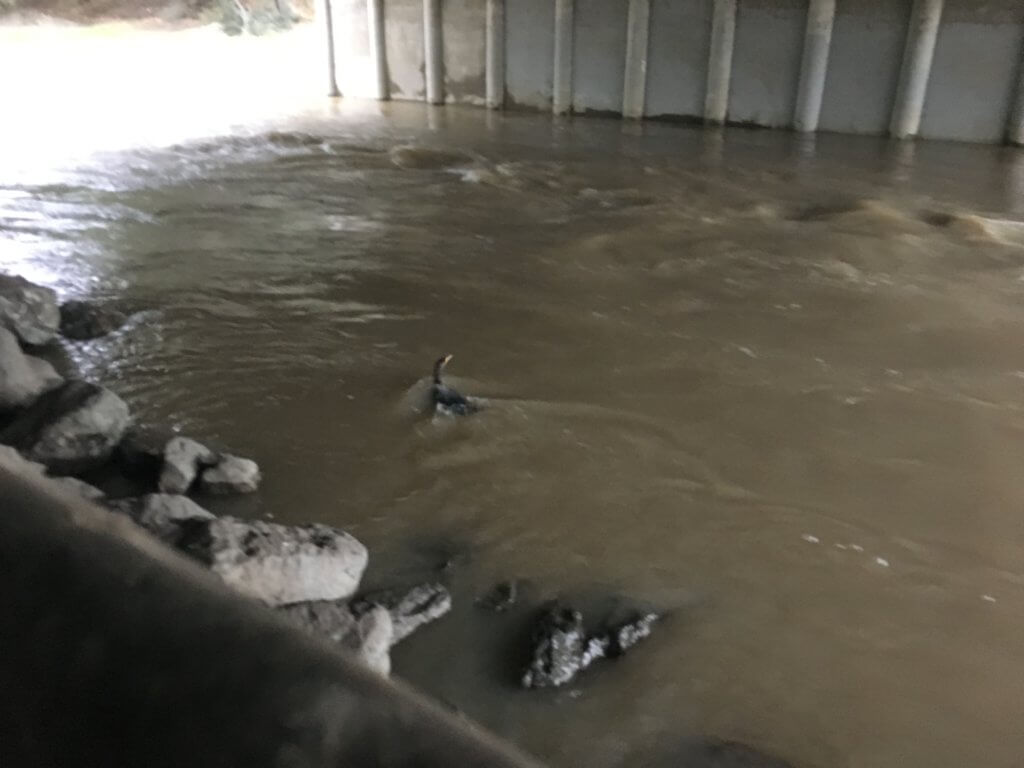 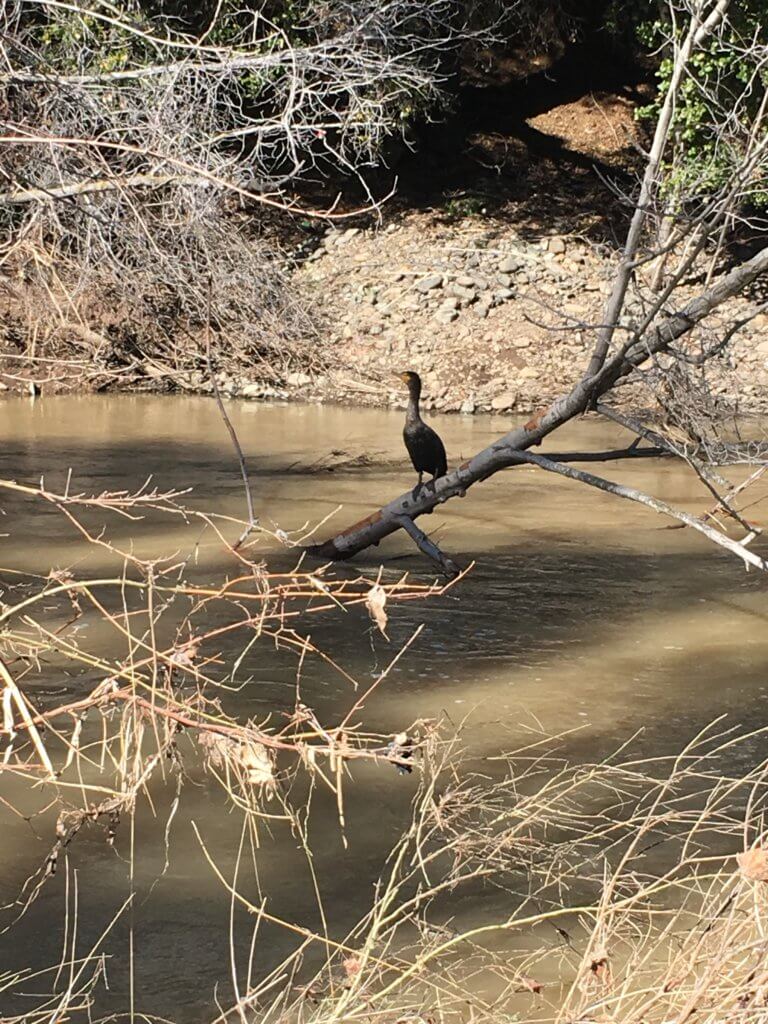 Even more surprises ahead.  After you went further down the creek and came to this spot – Look!  literally a bird’s paradise.  So many birds, of different species, gathered here, rested in this comfy patch made from branches and grasses brought by the flood water.  The patch was right in the middle of the creek, providing the birds all they needed: food, shelter, and a fun place to hang out.  After just one  day, though, the patch was gone, so went all the birds.  Such a view was not seen again. 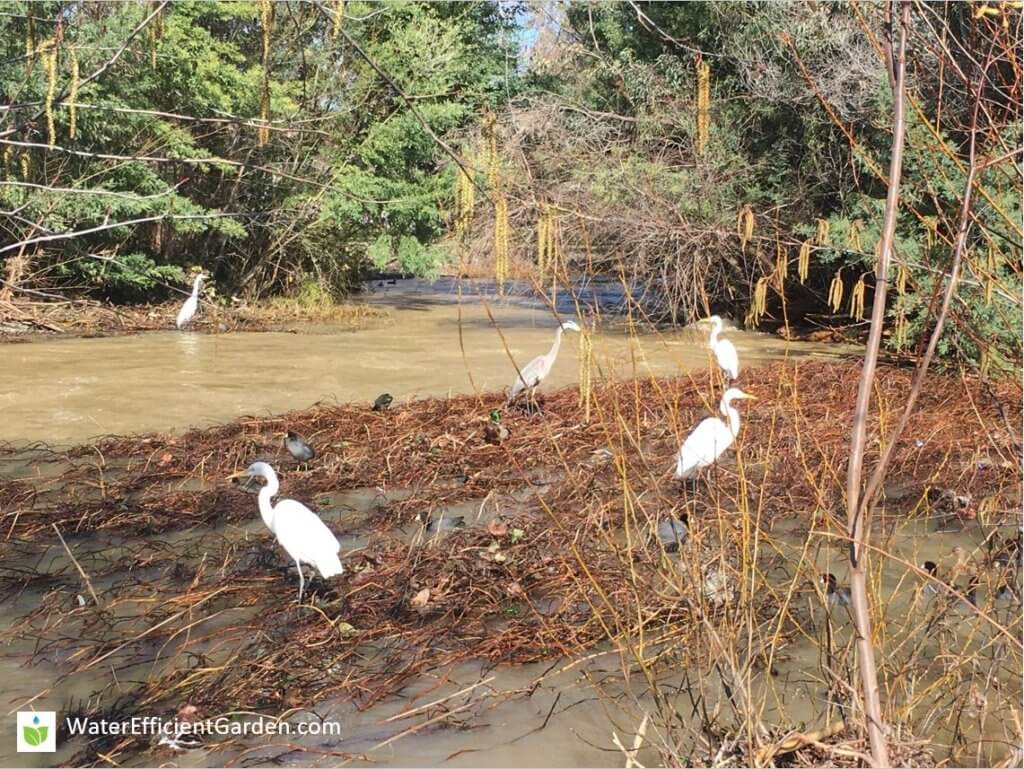 A great blue heron, and a great egret: 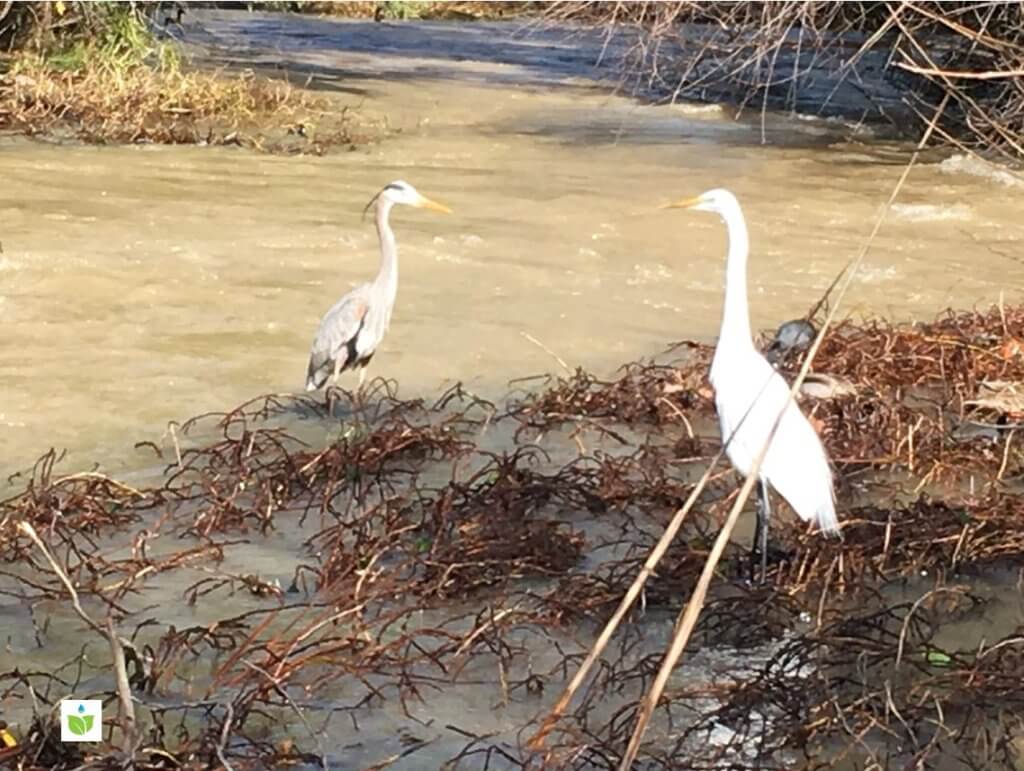 In the next 2-3 weeks when it continued to rain hard, more birds usually unseen could be found at the creek. 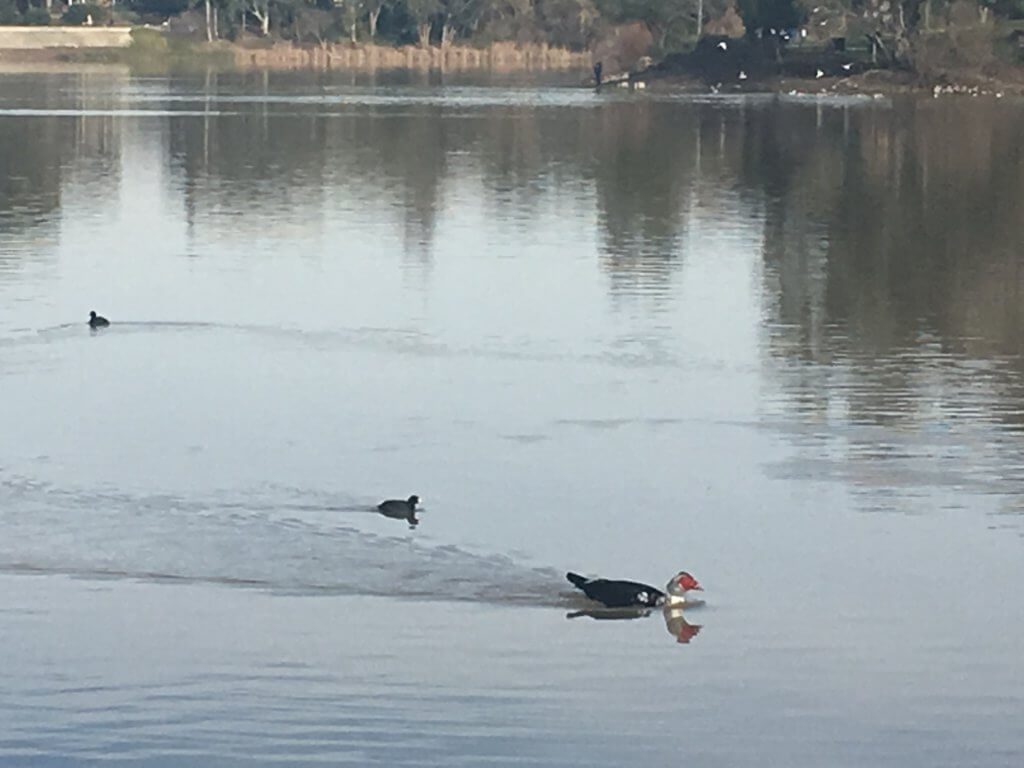 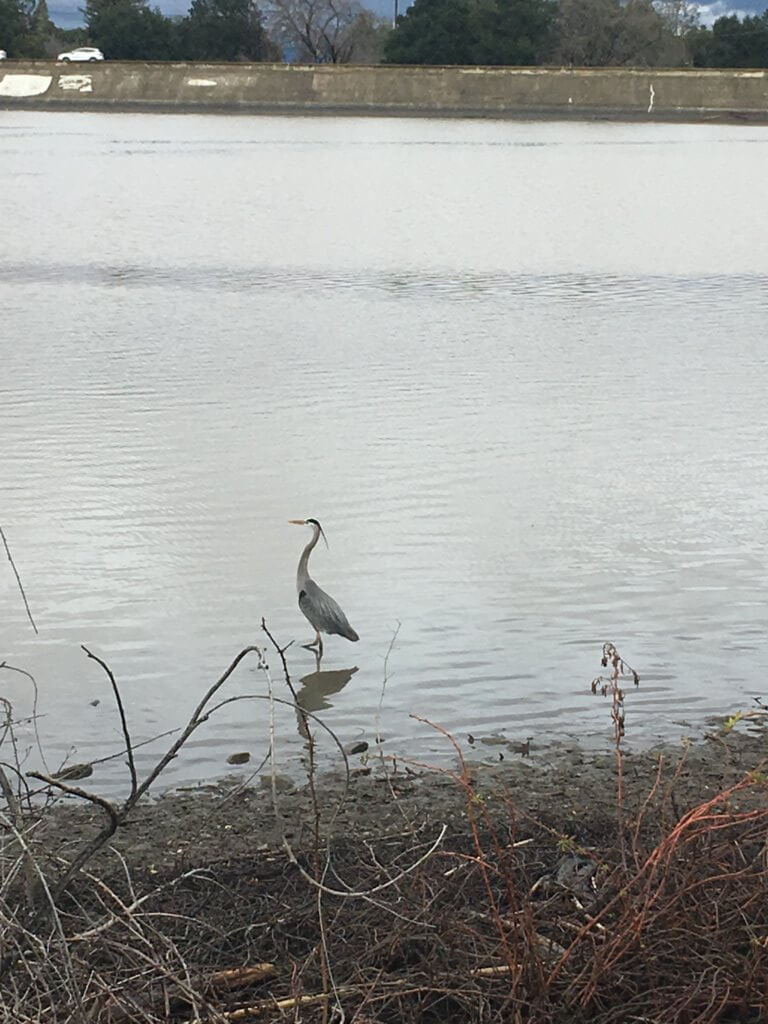 2 couples of the mallard duck.  Look at that beautiful blue stripe. 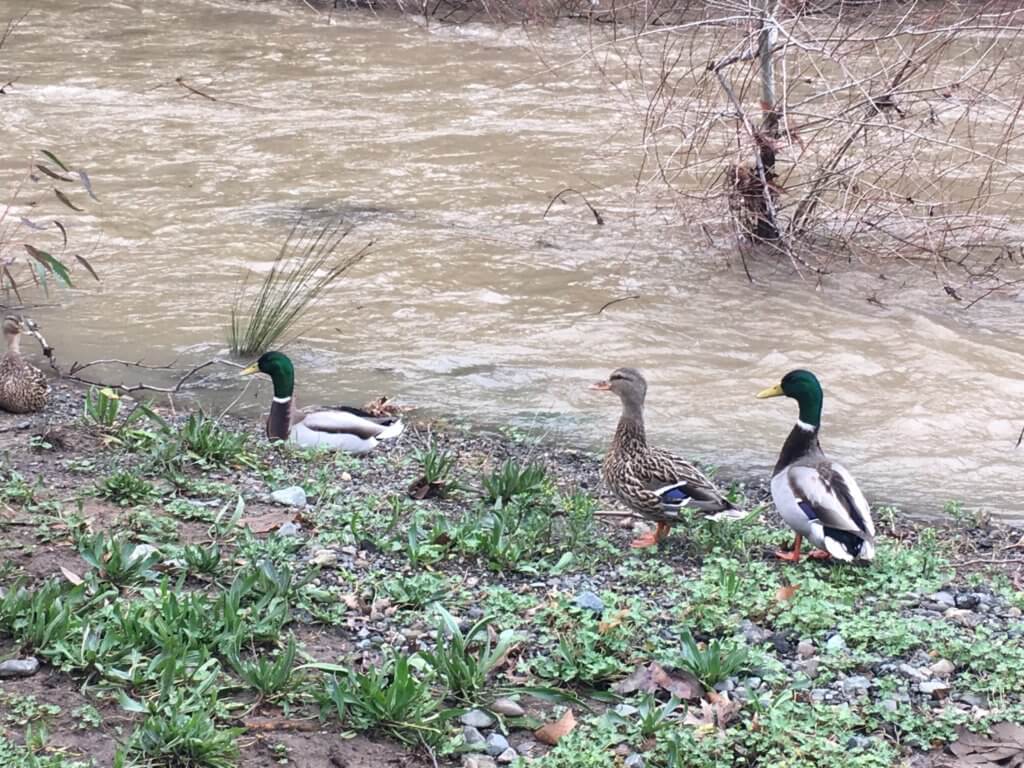 A big group of the American coot, on the flooded trail.  While coots can be seen often, such a big group was only seen during this time. 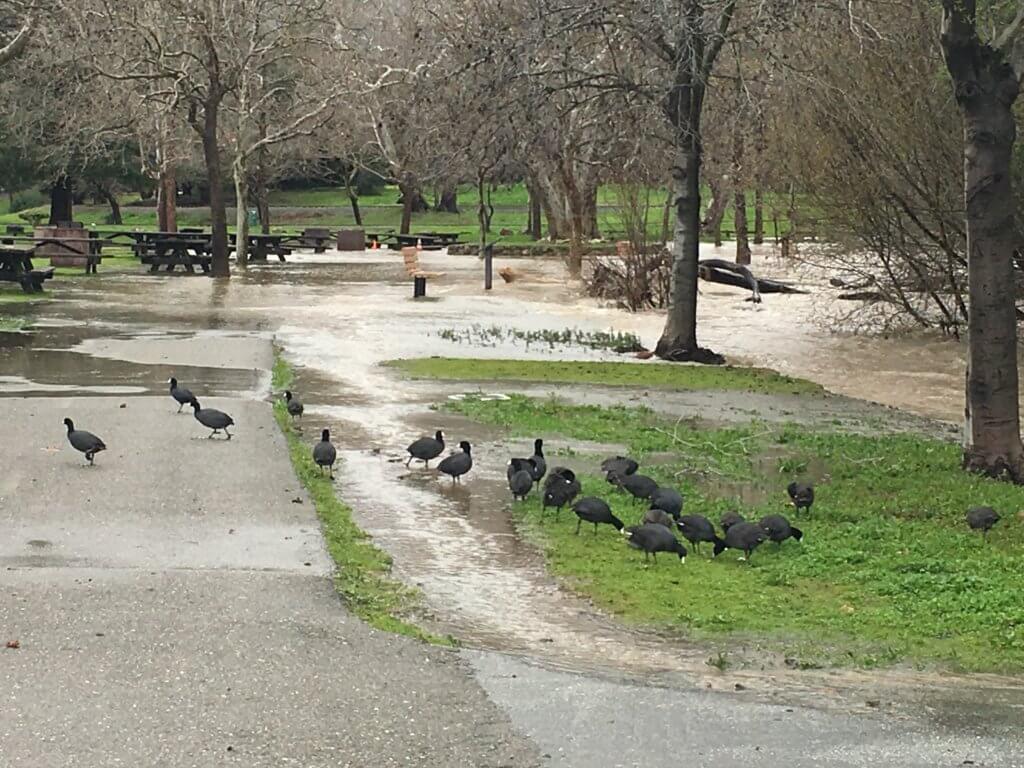 A big bird was seen here at the tree right beside the trail, towards the end of the rainy season. She really enjoyed the tree and stayed on it for hours, ignoring all the people who passed by on the trail.  She was seen only once.  This is a black-crowned night-heron. 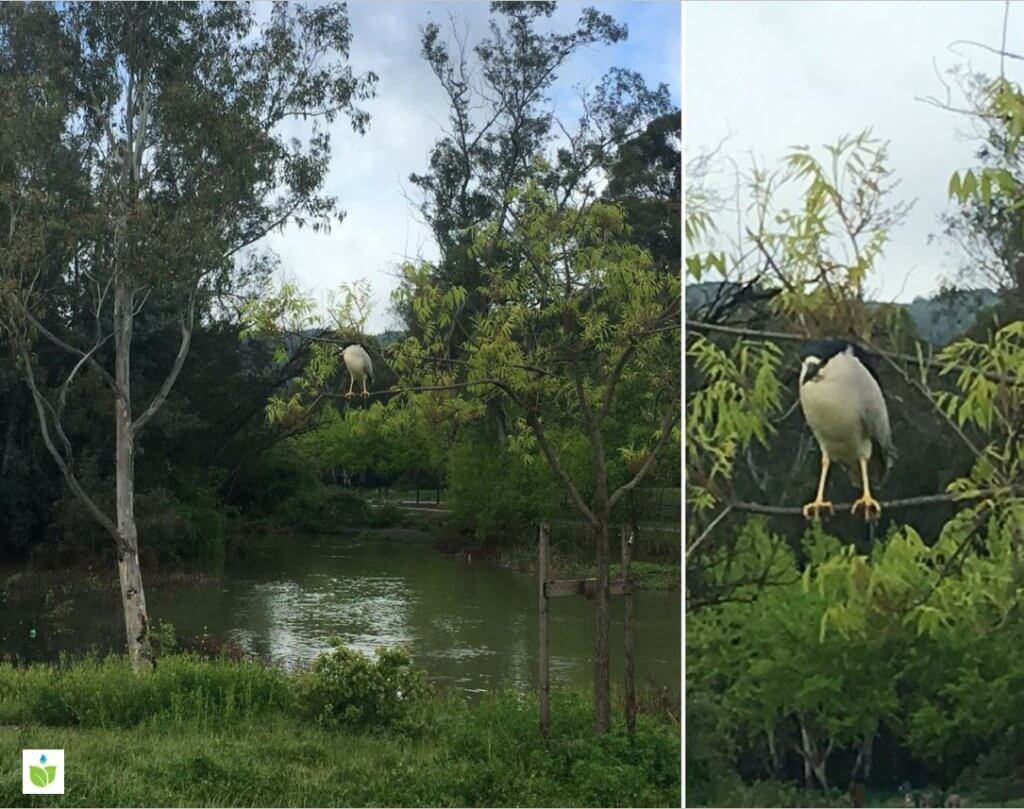 The heavy rains at Los Gatos Creek gave us a valuable opportunity to observe how a sudden increased level of water would mean for the creek habitat, and the ecosystem.  If we just look at the birds, the answer is clear: they loved all that water.  While we don’t have a count for the birds’ numbers during the storm time, the number of species, and the size of the bird groups we saw, increased quite significantly.  This happened with just 2 months of storms, one could only imagine how it would turn out if the same rains continued for a longer time.

In the last 5 years, when California experienced the epic drought, the birds, and the whole ecosystem at the aquatic habitats must have been very stressed.  They lost a big chunk of their habitat; at the habitats that did remain, water was way more scarce than usual.  As Professor Peter Moyle from University of California, Davis pointed out, “Drought is hard enough on us, and on farmers, and cities, and so forth.  It’s really hard on the fish, really hard on the aquatic and riparian systems.”

Water will just become more scare in the future, relative to our demand for it, with population growth, economic expansion, and climate change.  How can we manage and use it , so that we not only will have enough for ourselves, but also for the birds and fishes in the aquatic and reparian habitats?

While all kinds of solutions are being explored, one thing is clear: we must continue to conserve water,  which is the easiest and cheapest solution among all.  In California, we use half of our water in outdoor landscaping.  If we can all switch to water efficient gardening, we can surely save a significant amount of water.  As we see in the picture, when we save water with drought tolerant plants like these Mexican bush sages, we no only save for us, but also those birds in the creek. 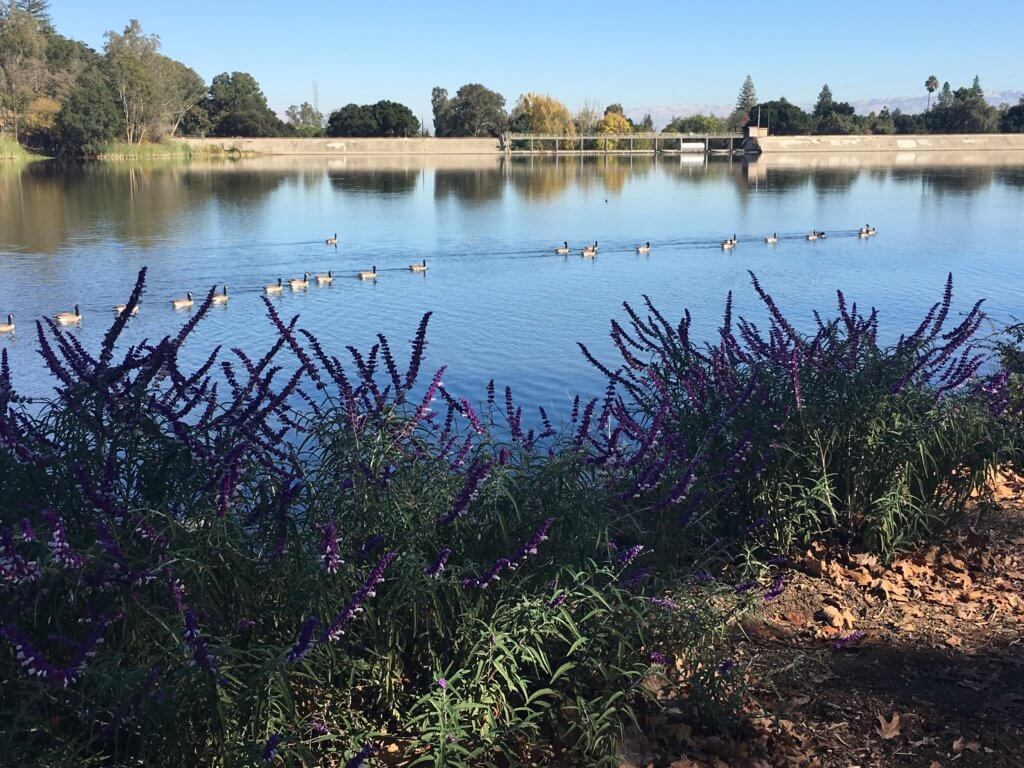