We all know how important it is to have trees and plants in the cities.  They absorb carbon dioxide, produce oxygen, filter harmful particles from the air, lower temperatures – just to name a few.  With population growth and climate change, it is more important than ever to have more trees and greenery in the city.  Tokyo, with a population of over 9 million, is one of the most populous cities in the world.  How does Tokyo make its city green?  Some observations from a recent visit provides some interesting lessons.

In big cities, every inch of land is valuable.  Everyone wants more trees and green, but where to plant them?  Well, turns out, if you can’t do it on the ground, you can do it elsewhere.  Take a look…

In an office building

In this building, you don’t see a glass wall at second and third floors, instead you see…trees!  Yes, trees, tall and dense as they block out most of the outer spaces at these floors.   Only from the 4th floor up will you see the glass walls .  This is a green building, literately. 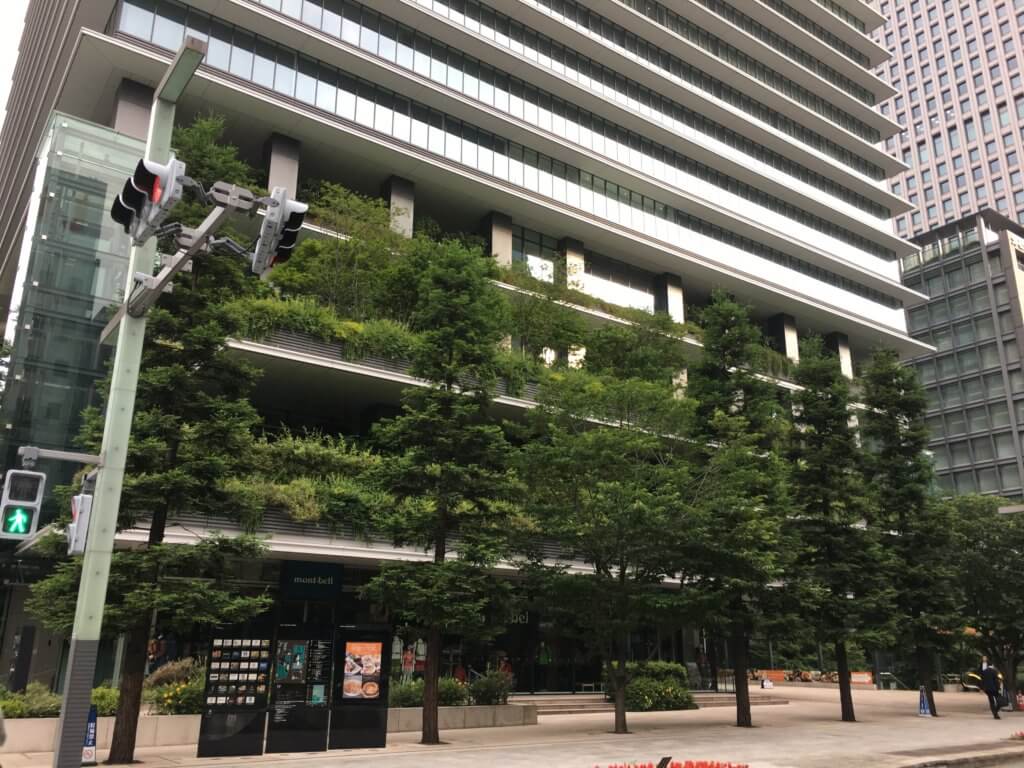 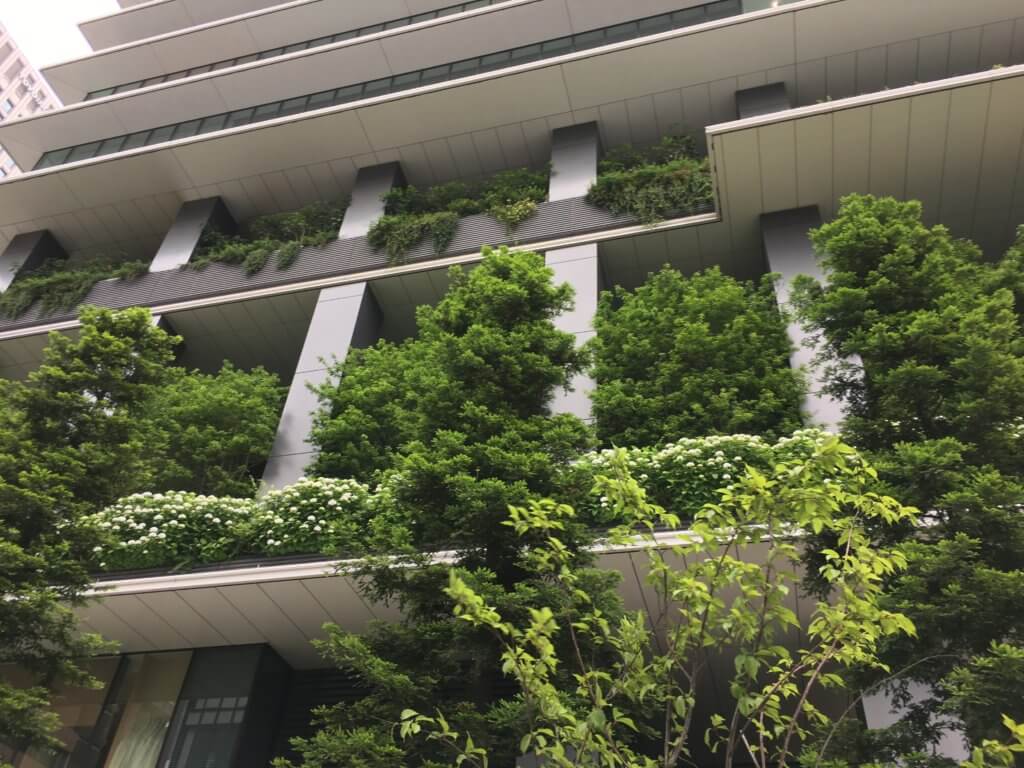 This is a big train station, with a bullet train station inside.  The foot traffic can be heavy.  Look at this stair – the wall is completely covered by plants. 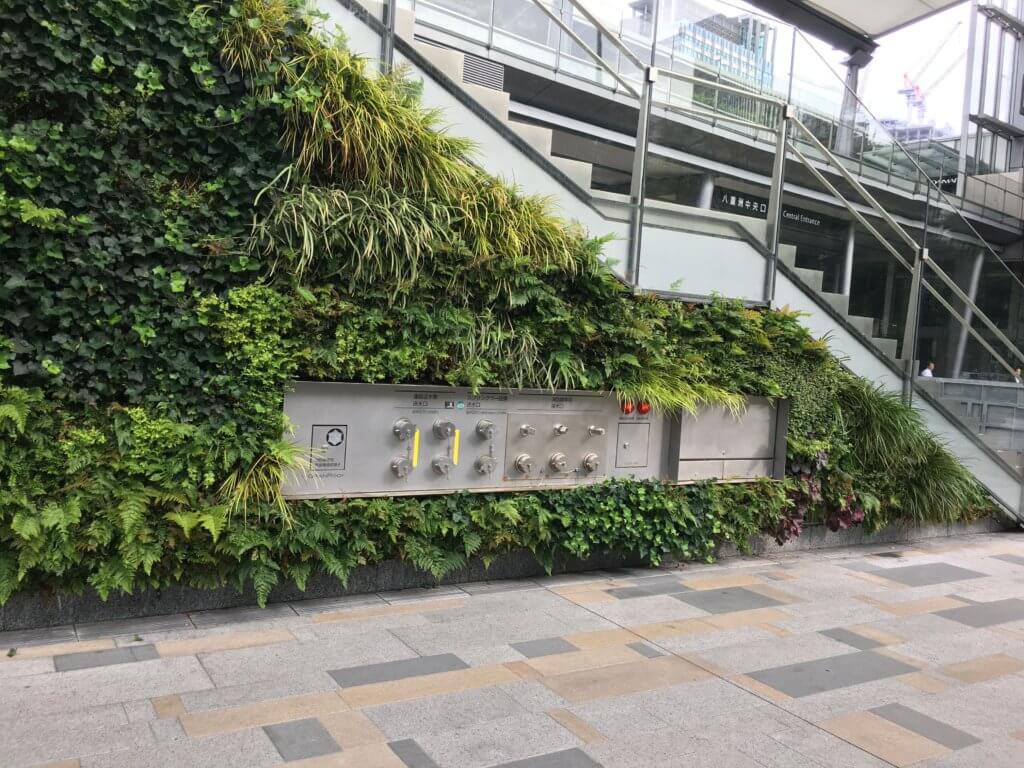 Opposite the station entrance, is another wall, also covered by plants. Over the wall is a busy boulevard with heavy traffic, but you almost can not feel it, as here on this side all you feel is quiet and comfort. 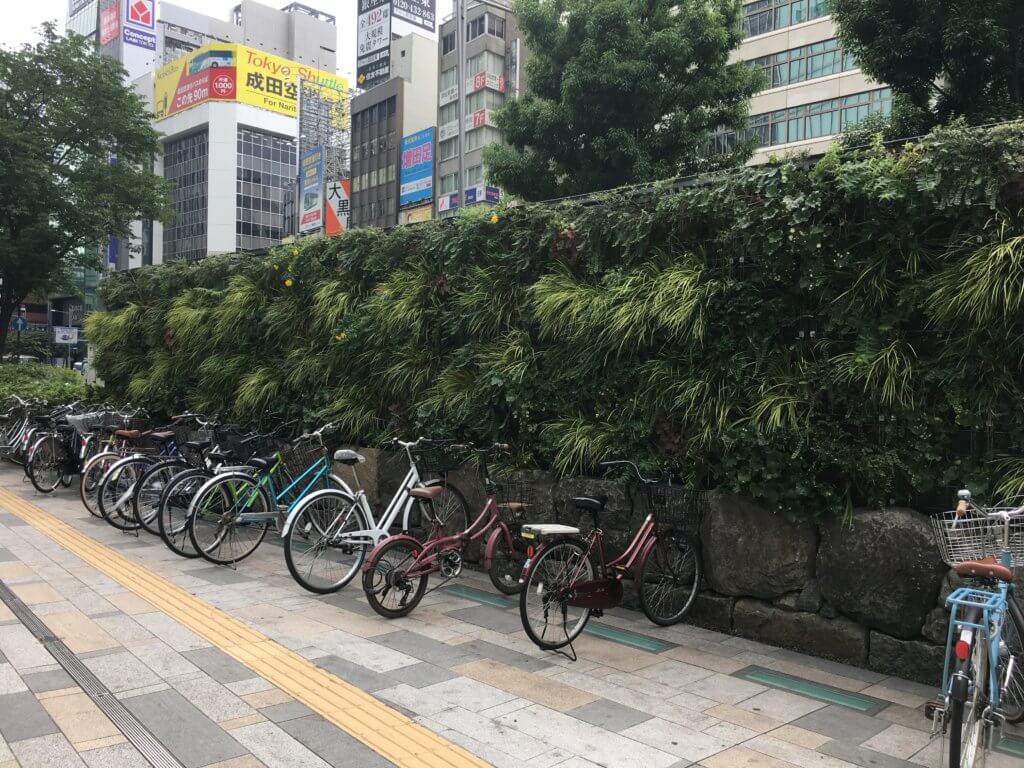 On the base of a flower bed

Not just a flower bed, but one with a green “skirt”?  Nice.  Planting at the base of the flowered bed adds more plants and green to the space, enhance the view, make the air fresher and environment quieter. 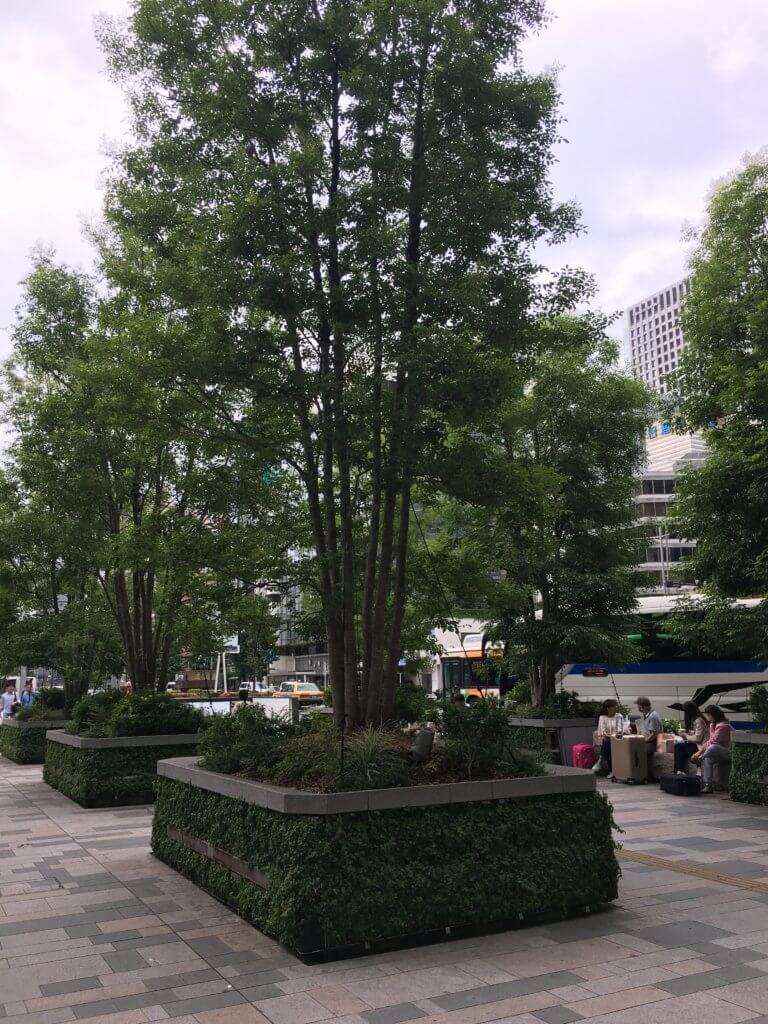 A space of trees doubles as…

In Tokyo, trees don’t simply line the streets, they are used in quite some other ways.  Here a space with trees and plants is used as…

This space is in front of a shopping plaza, just off a busy boulevard in Ginza, Tokyo.  Here the colorful sitting blocks in the trees and plants provide a perfect rest area for shoppers and people who walk by. 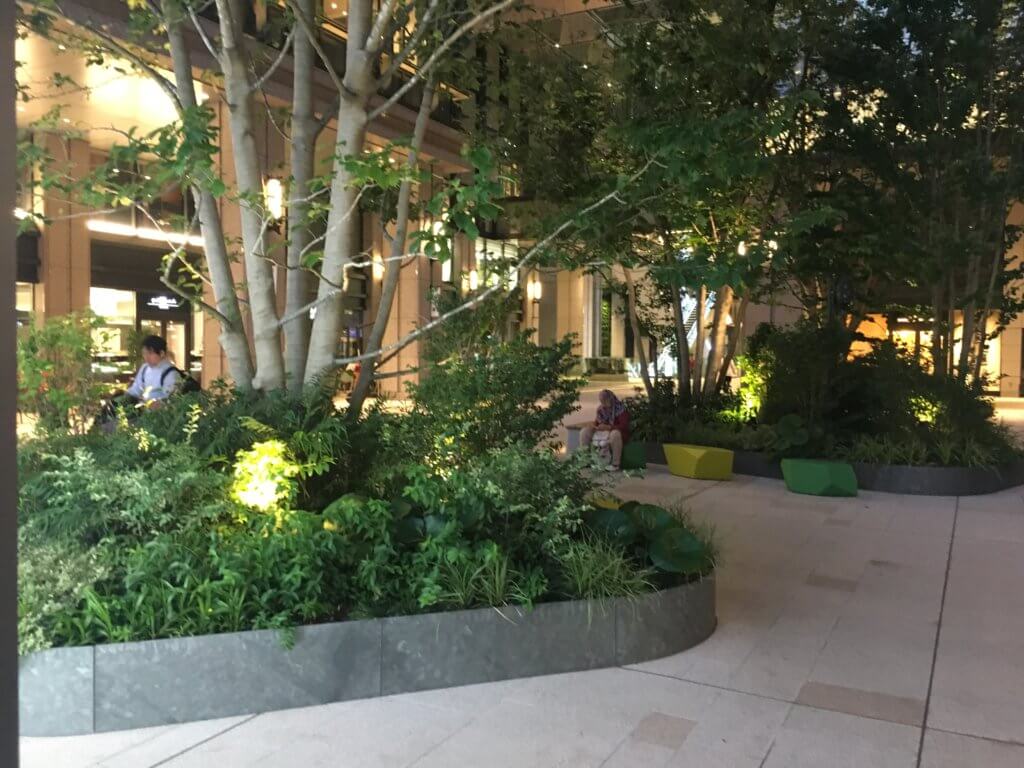 A part of art

You will find this beautiful view at a street corner right across an entrance of the Imperial Palace and the moat surrounding the palace. Here, the tree is the centerpiece of this very elegant piece of art. According to the information bulletin, “These camphor trees (ones shown in the photo) have been on the site since the 1970s, long pre-dating the construction of the building.  During construction they were planted elsewhere, and then replanted…as a symbol of the building.” The 2 jade boats on the water is a throwback to the days when “Tokyo was once a city where boats piled the moat as a waterway”.  Trees here have become an integral part of the environment, and history. 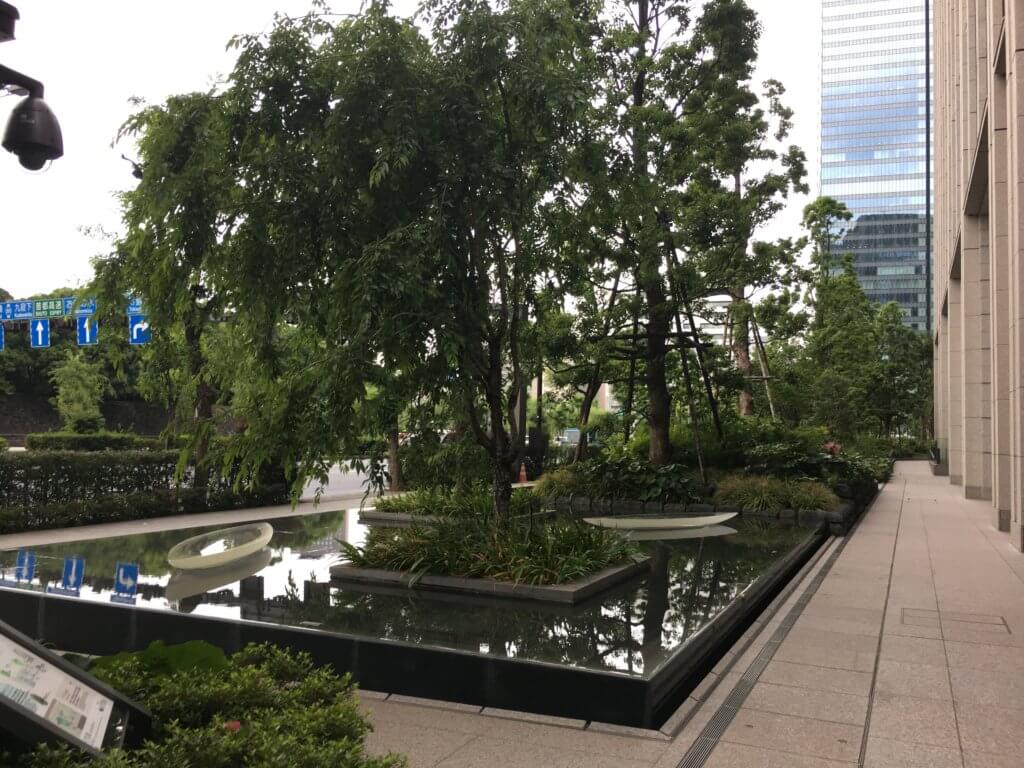 At the train station shown above, the green wall is like a piece of art too. Look at the all the greens of different shades, heights and textures.

Tokyo is a city quite friendly for bicycles.  In some parts of the city, the bicycle lane is not in the streets, but on sidewalks.  The bicycle and pedestrians lanes are distinguished by the different colors on the floor – red for pedestrians and grey for bicycles.  It is safe and easy to ride a bicycle here. 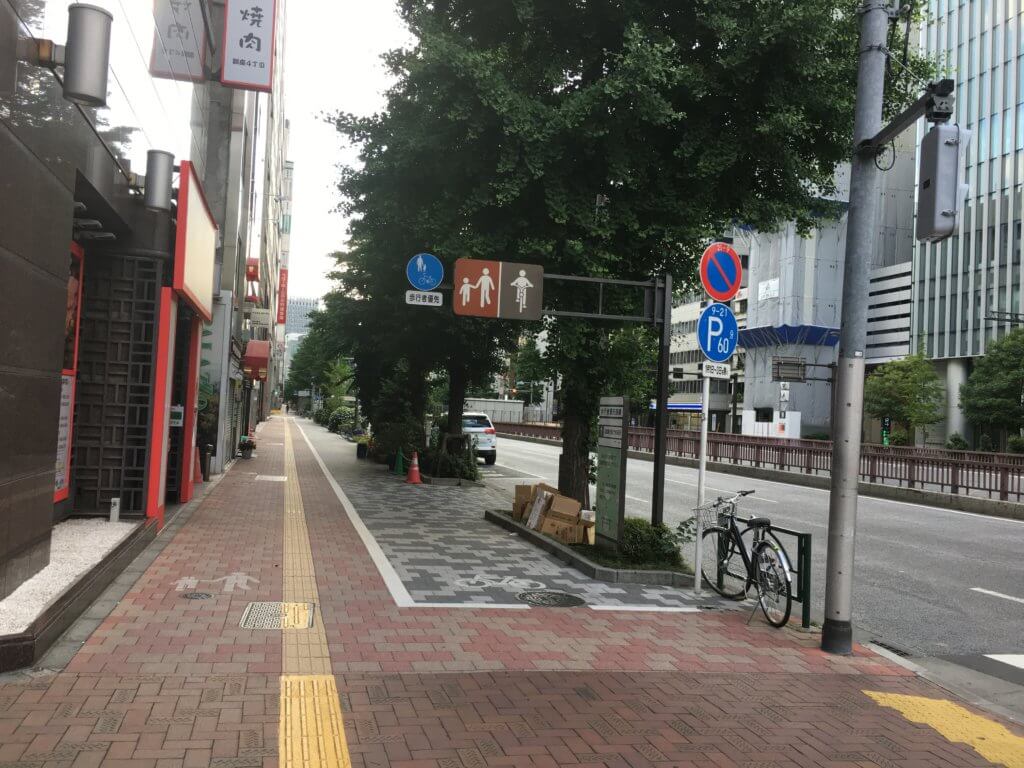 There are parking areas for bicycles on the sidewalks, near a train station, etc. 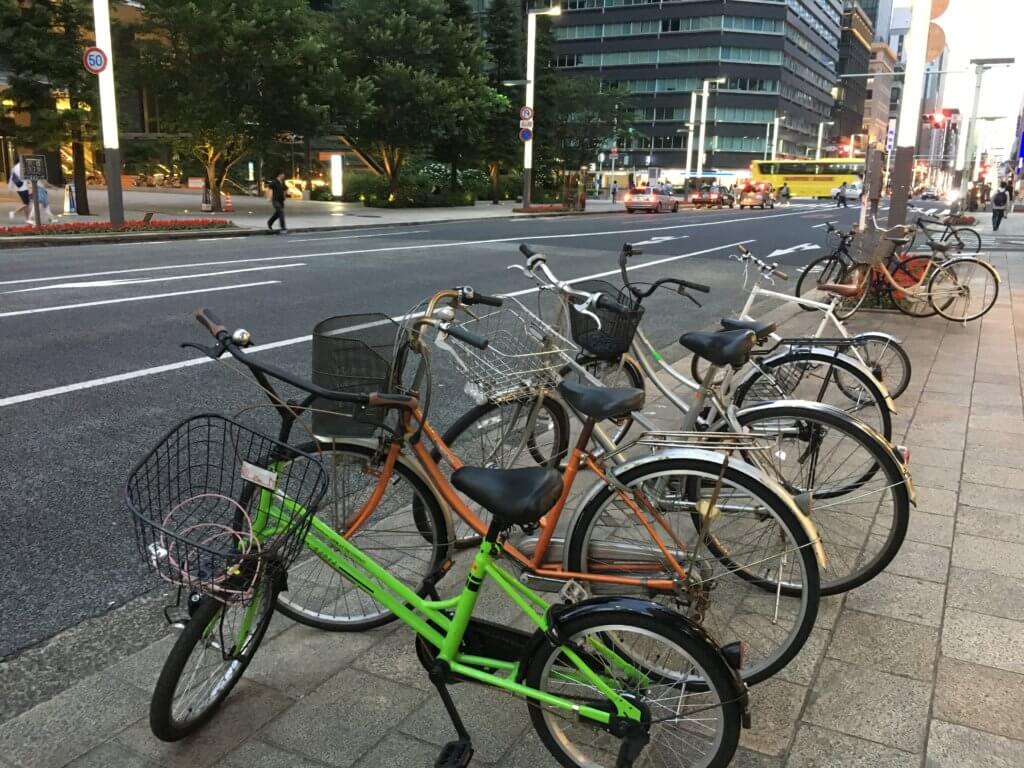 Using bicycles, instead of cars in a city can reduce carbon emissions, help with the air quality and reduce the heat island effect.  Facilities like these make it easy for bicycling to be a way of life.

In summary, while Tokyo is a big metropolitan city of over 9 million people, aboundance of trees and greenary makes it a much cleaner (air) and quieter city than you would imagine for such a big population.  Trees are critically important for a city’s environment, we can plant more of them in the place we live in too – in the streets, parks, and our gardens.